Along Came the Rain 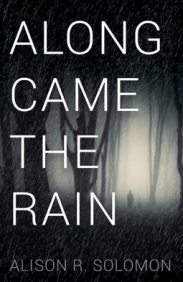 Along Came the Rain by Alison R. Solomon (General Fiction)

Grandma says: This is a suspense-filled story told from the points of view of two major characters, Wynn and Barker, and two additional characters, Parminder and Kallie. Wynn is an older woman, a self-employed jewelry-maker who is somewhat eccentric and quirky; Barker is a social worker and the younger woman in this domestic partnership. Parminder is an intern working under Barker, and Kallie is a fifteen-year-old foster placement of Barker’s.

A kidnapping with an unusual motive is the basis of the story, which proved to be very engrossing right from the beginning. I found the outcome to be a total surprise, far from predictable, and the entire book an enjoyable read. Wynn and Barker are believable and well-developed characters. I could feel Wynn’s periodic confusion and frustration with herself, and I came to really like Barker because of her dedication to her clients. Parminder and Kallie are less developed, but that felt okay because the story belongs to Wynn and Barker.

My main criticism is that, while the story is told from the points of view of four different characters, their voices never differ. Kallie, a fifteen-year-old coming from a decidedly rougher background, possesses a vocabulary and sentence structure similar to that of the adults. Parminder, a native of India, does not have any distinctive characteristics to her narration. I also had a problem with Wynn’s ability to accept and forgive when she is grievously wronged, but it’s possible that she might just be a better person than I am.

This book was well-written, an enjoyable read, and I found no errors of note other than a single word that should have been edited out and multiple places where I would have expected commas. I would highly recommend it for anyone looking for a quick suspense novel with a satisfying ending.

Bella Reads and Reviews received Along Came the Rain as an ARC via NetGalley in exchange for an honest review.

4 thoughts on “Along Came the Rain”