This is Not a Love Letter 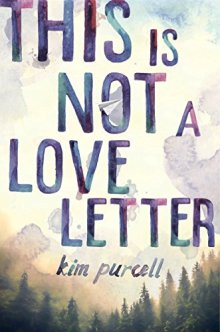 This is Not a Love Letter by Kim Purcell (Young Adult)

Jessie’s boyfriend, Chris, has gone missing shortly before high school graduation, and now she is documenting everything that is happening as she waits to find out where he is. The book is written as though she is speaking to him the entire time, so she is always saying things like “you would have liked …” or “your mom said …” or “it reminded me of when we …”. As a result, it wasn’t long before I felt like I knew both of them really well. The author did  an excellent job of describing Chris’s personality and attitudes through Jessie’s eyes and her anecdotes about their relationship.

Jessie herself is somewhat crude and tough. Her dad is out of the picture and her mom is a hoarder, making Jessie ashamed of her home and frustrated with her life. She shoots from the hip and doesn’t mince words. Chris is a gentle soul who recently moved into town – a straight-A student, a gifted baseball player, and a pacifist. He’s a good influence on Jessie, giving her a sense of worth and direction that she didn’t have before he came into her life. But he’s also a black kid from Brooklyn who doesn’t really fit into this all-white paper mill town in the Pacific Northwest, and he has already dealt with bullying from some of the locals. Many possibilities exist for why he has gone missing.

The book also has several strong peripheral characters who are well drawn and add to the story – both his friends and hers. I never knew for sure what was going to happen, and I really came to care about both Chris and Jessie. Being the same age as they are, I found myself thinking I would like to know them personally, which only happens when a writer does a great job of bringing characters alive. While the plot did not wow me as much, I really enjoyed the characters and the interesting way in which the story was told.

Bella gives This is Not a Love Letter four stars.

Potty-mouth Index: Moderate use of the “f” word; realistic for the character depicted

Bella Reads and Reviews received a free ARC from the publisher via NetGalley in exchange for an honest review.

This is Not a Love Letter will be released on January 30, 2018 and is available for pre-order.

One thought on “This is Not a Love Letter”